A Review of the iPhone Field Guide by David Sparks 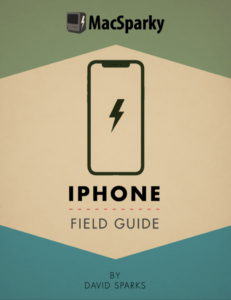 David Sparks is a productivity legend. And it’s not just about productivity – it’s about meaningful productivity. David churns out field guides, maintains a podcast, creates youtube videos, works as a full time attorney, and still spends time with his family.

Productivity is not just about finding some system and then sitting with it. It’s about continually reflecting on what is meaningful and then arranging your world to develop that. I enjoy our periodic get togethers to hear how he is modifying and adjusting his world.

The iPhone field guide is one of those understated solid works. Throughout his Field Guides, David always manages to bring what’s important clearly out front. The presentations are simple, in the way that you know they are well thought out.

The iPhone is today’s Swiss army knife, applicable in so many situations. There are about 40+ categories of use in the book. In each category, David presents the introduction of its use, major app players in the field, his favorites, and why they might be his favorites. He makes suggestions for difference use scenarios so you can make your own decision. And, this is all coming from a guy who messes with Apple stuff quite regularly.

He does not hesitate to say where he has an unfavorable impression of something, but I think he also tends to leave out much of anything that doesn’t make the cut. He’ll also give practical advice, for example with how he tends to manage his “read-it-later” type services.

I use an iPhone, a Macbook Pro (2013), and an iMac (no iPad) so this was excellent for me. While reading, I realize how settled in my ways I can get. But also, while reading, I found myself downloading a significant number of apps, many free, that I’m now trying out. I’ve also discovered silly things like stickers in the message app. Who knew there were stickers there?

He also broadly categories users of the iPhone. Apparently, I’m a “two-pager”. I thought I was a unique snowflake. Ah well.

Whether he realizes it or not, David keeps convincing me to try using Siri. I’ve always had a contentious relationship with Siri. Often she doesn’t understand what I say. While others have told me I sometimes mumble, I don’t often believe them. Now Siri, seems to be claiming the same, though politely not mentioning it. But as I learn to enunciate, (or at least mix my mumbling with grumbling) I can use “Hey Siri, Show me help” and see what I can practice. Looking through David’s list of things he can do with Siri, he apparently makes phone calls to Beyoncé.

This site uses Akismet to reduce spam. Learn how your comment data is processed.

Please note, this site does have some affiliate marketing links, which means I may get paid commission sales on sales of those products or services written about. Barring unconscious influence, I only link to things that I genuinely believe the reader may find valuable.