Every organization is an investment of time. Sometimes, it’s even a good one. I’m reminded of this wonderful graph in which a person figures out a smoother means of doing something though it takes a while to get there.

In any case, I’ve had some fun combining Hazel and the Mac OSX Services menu and thought I’d present it.

A while back, I had described on the MacPower Users podcast about a “Sorting” folder in which I have a large set of Hazel rules. Hazel is a program that basically looks at your files and does what you tell it to do to them.
For the Sorting folder, each Hazel rule has the program look inside the folder for a specific file name (for example “phone bill”), rename it (“2012-07-09 phone bill”), and then send it to its appropriate folder (“Phone Bills”):

At the end of the list of sorting rules is a final “Not Sorted” rule. Anything that does not have a sorting rule will be returned to the desktop. That way, nothing gets hidden that should not be hidden, and I can see when an additional rule may be useful. The system becomes a nice iteration of organization:

At the end of the day, any number of files sitting on my desktop may await sorting. I would gather these files and add them to the “Sorting” folder where Hazel would do its thing.

It’s a neat process which is an adaptation of David Sparks’ own methods described quite nicely in his latest work, Paperless. As a result of Paperless, I’m also 15.9% less frightened of the Automator program. So I’ve now created a service in Automator to move files to the sorting folder:

I then added a shortcut in the Services menu (Apple -> System Preferences -> Keyboard -> Services Menu): 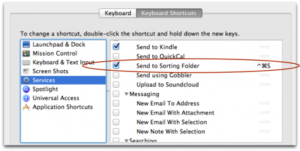 Now, in order to sort, I just grab all the files on the desktop (Command-A) and type the keyboard shortcut (Control-Command-s). Everything goes where I need it to go and files have a date appended at the beginning. Anything that does not have a rule, returns to the desktop.

This site uses Akismet to reduce spam. Learn how your comment data is processed.

Please note, this site does have some affiliate marketing links, which means I may get paid commission sales on sales of those products or services written about. Barring unconscious influence, I only link to things that I genuinely believe the reader may find valuable.